This is final part of a 3-part series on the initial learning workshops in Kigali, Rwanda,Â  focusing on EPAK and Kicukiro schools.

EPAK:
EPAK is located in Kigali. The school has a total of 420 XO laptops, 350 were given by the government; another 70 laptops were given by international humanitarian organization, Right to Play. There are 680 students and 15 teachers. So that each student at the school has access, students in the morning Â session will share their laptop with students in the afternoon session. Laptops were first dispersed during the OLPCorps training. 15 OLPCorps members and Paul Commons, Reuben Caron, and David Cavallo of OLPC led the distribution and training sessions.

On day one, the team prepped by discussing a variety of issues which were likely to emerge, such as language barriers, how to address concerns of integrating the laptops into the curriculum, etc.Â  Teams touched upon each issue individually and designed approaches based on this discussion.Â  For language, a majority of the translation was led by KaÃ§andre Bourdelais from Laval University.Â  However, during the individual training sessions, French speakers were assigned to a separate teacher to manage translation. The training provided mostly individual attention on programs that teachers wished to explore in more depth.Â  Teachers varied in the activities they explored, from Measure and Scratch to Turtle Art.Â  Later that afternoon, the same teachers were seen explaining what they had learned to their students and how they’ll have the same opportunity the following week.

Day two began by reflashing and NAND blasting several hundred laptops before distribution–only to find out halfway though that the image file was corrupt.Â  As a result, the majority of the morning was spent installing the latest build.Â  By lunch time, however, all EPAK’s classes had laptops.Â  One particular lesson Corps teams took from this experience was the variety of teaching styles carried out in the classroom.Â  Some teachers, like P1, preferred more strict, instructional techniques, a few teachers valued individual exploration, and others attempted group work.Â  Unfortunately, unexpected power issues at the school forced us to stop by late afternoon. 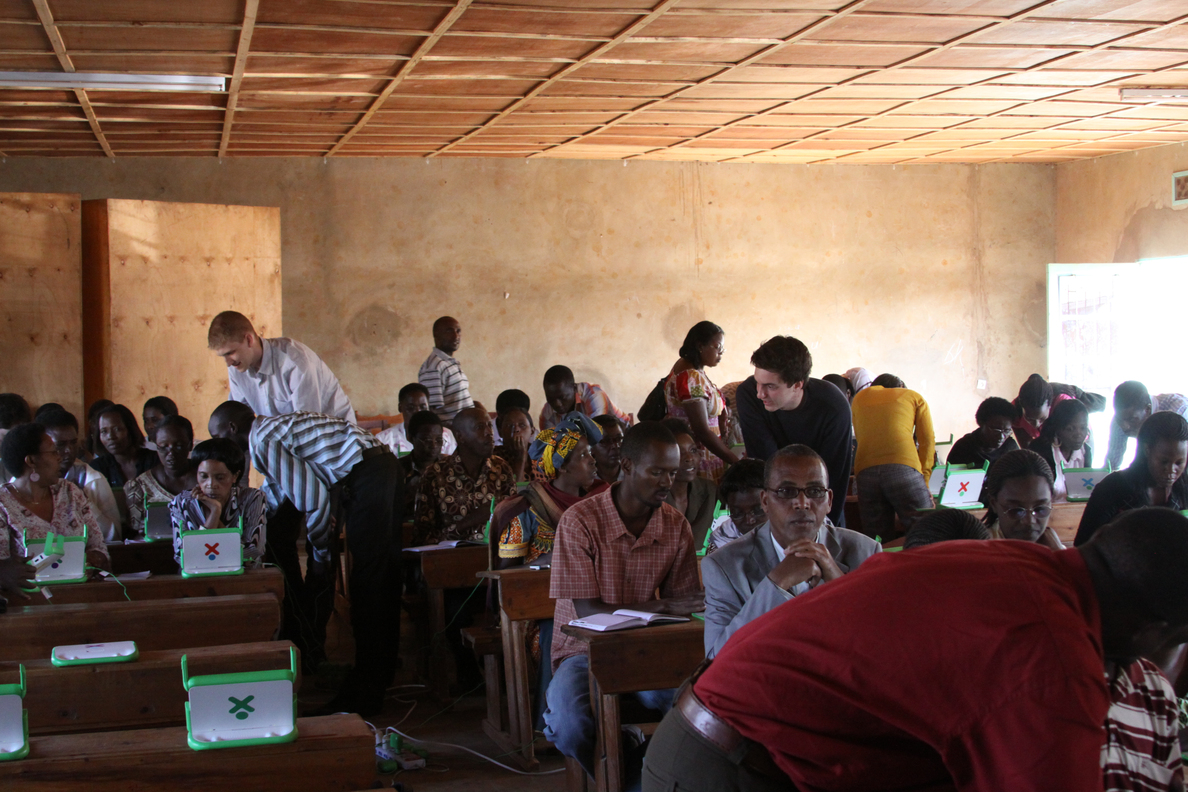 Language was the main hurdle here.Â  More photos and conclusions after the jump.

Pauline NYIRAHIRWA and Herve MUNYURANGERI of the Rwandan Core team and Brian Jordan of the OLPC Learning Team facilitated the two sessions at Kicukiro alongside 25 OLPCorps students. On Friday, the 44 teachersÂ were introduced to Scratch for their first time. With descriptions and directions in Kinyarwanda by Pauline and Herve at the front of the room, the OLPCorps members roved around the room assisting teachers.

In assisting teachers, we described in words what to do, letting them do things themselves.Â  Near the midpoint of the session, Corps members noted many teachers were still having trouble with the ‘drag-and-drop’ action.

On Monday, the second day for OLPCorps members at Kagugu, teachers were asked to teach a lesson using the laptop. With 5 classrooms full of semi-charged XOs and only 8 power strips, electricity was the show-stopping issue in the morning. Teams consolidated the power strips to focus on working with one classroom. Pauline worked with a teacher to establish a lesson plan using the XO’s Paint activity. Herve said the teacher found this to be beneficial. At the end of the session, some free time was given for students to try different activities on the laptop. Photos with the visitors using Record and exchanging English and Kinyarwanda words using Speak were favorites, and some Maze-racing occurred. 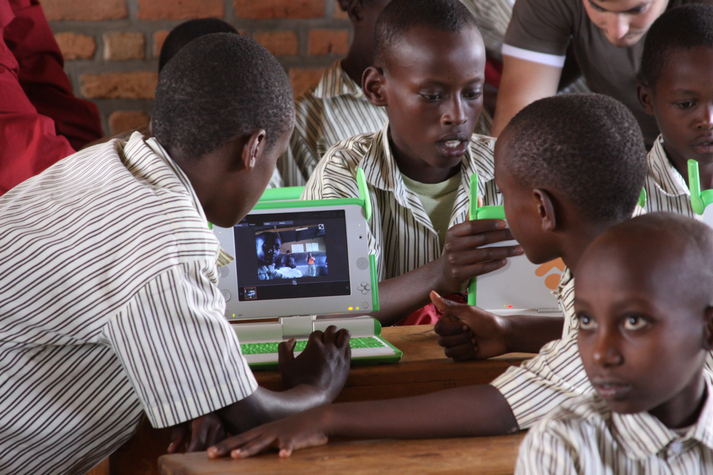 Conclusion
The time in the schools was mutually beneficial for all involved: the Rwandan core team was able to meet with enthusiastic university students, just beginning their deployments; OLPCorps teams learned from the experienced Rwanda core team; teachers and students had individualized time with the Corps and Learning Team to focus on specific activities, especially those that will be useful to them in their classes.

Despite some challenges that will be continuously faced, such as, power, language, etc. The trainings were a success. Many teachers commented that they were now able to see some new possibilities for incorporating the XO into their class plans and many made the commitment to use more, or to begin use in their classroom.

We realize that not everything will be learned in a 2-day, 2-week or even 2-month workshop, training is a long-term process. These trainings will continue with an XO Camp that the Learning Team are holding with teachers and students over the July holiday.

In addition, the Learning Team is working with The New Times newspaper to publish a weekly challenge to students with XOs.Â  Last weekend, an open session took place for students who wanted to learn more about Turtle Art for this past week’s challenge (pdf).Â  Several students from Kagugu Primary School came.

Please share your thoughts and stay tuned for updates from all of these schools as the summer progresses.

1 thought on “OLPCorps in Rwandan schools, Part 3: EPAK and Kicukiro”