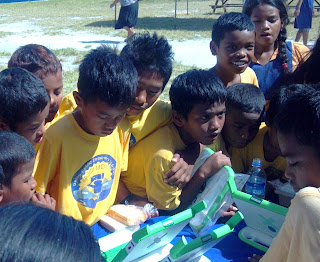 Hundreds of students, parents, educators and officialsÂ gathered today in Majuro, remote capital of the Republic of the Marshall Islands (RMI), to formally launch the One Laptop per Child program in the developing Pacific nation. The launch was the culmination of more thanÂ 18 months of cooperation and planningÂ between the Marshallese people, their national government, and their development partners: the United States, the University of the South Pacific (USP), and OLPC Oceania.
In attendance at Majuro’s Delap Elementary School were RMI’s President,Â His Excellency Christopher J Loeak, the Minister for Education,Â Dr. Hilda Heine, and the US Ambassador to RMI, the Hon.Â Thomas Armbruster. 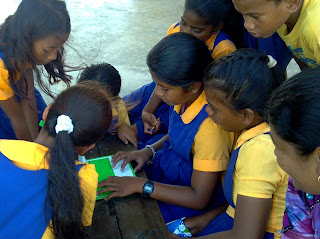 Delap is the first school in RMI to provide laptops for its students. 320 laptops were distributed to every student and teacher in grades 4,5 and 6. The school has full wifi coverage and the laptops connect to a high-speed optic fibre internet connection through an XS School Server loaded with many useful digital resources appropriate for Pacific learning and RMI’s curriculum.
Addressing the event, Minister Heine thanked the US government for funding the project through its continued support of the Ministry of Education, and acknowledged the supporting role of USP and OLPC Oceania in bringing the project to fruition. The Minister emphasized the extensive training of teachers, the importance of e-Learning to the government’s vision for education, and the MOE’s plans to connect Â all schools on Majuro to the internet. There are already 12 solar powered VSAT ICTÂ centresÂ scattered across its far flung outer islands and atolls. 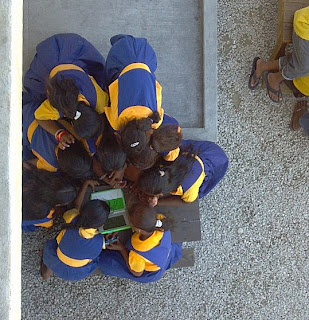 Delap’sÂ Grade 6 kids performed two songs for theÂ occasion,Â one especially composed for OLPC. Singing in Marshallese, it was easy for non-native speakers to understand when the children held up their new laptops shouting O-L-P-C. The launch attracted national media coverage, was broadcast live over local radio and was the topic of several speeches in the national Parliament.
Veteran Pacific OLPC expert,Â Mr Ian Thomson, now E-Learning Fellow atÂ the University of South Pacific, has travelled to Majuro several times for USP in the past year to advise the RMI Government on deployment and to conduct teacher training workshops ahead of today’s handover. USP signed an MOU with OLPCÂ Oceania to support Pacific deployments in 2010. USP has been assisted by OLPC volunteerNicholas Dorian, who has been in the country for several months.
As part of OLPC Oceania’sÂ community inclusionÂ approach,Â Mr Thomson conducted aÂ community briefing last week attended by several hundred parents and community members.
“They asked some very good questions as well,” said Mr Thomson. “We are now planning another session on XO basics. The next phase of the project is to launch the project in two more Majuro schools in coming months and then to five outer island schools over the second half of 2013.” 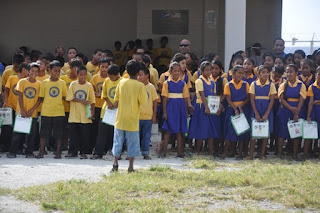