Ethnographer and photographer Laura de Reynal has been documenting the work of organisations, such as Mozilla and One Laptop per Child who are helping communities to get online for the first time. 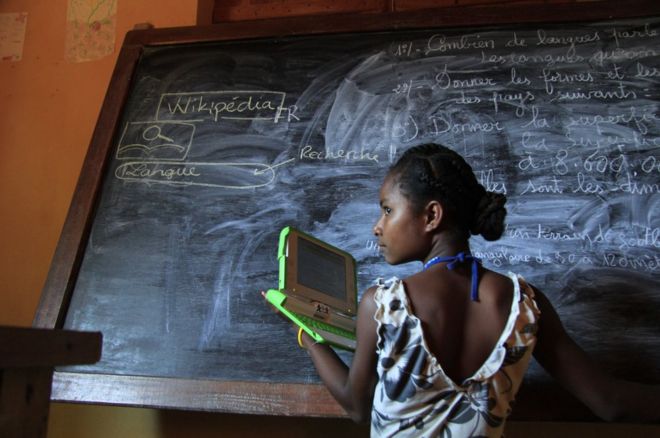 The first online experience for these 16-year-olds in Madagascar was browsing Wikipedia and writing what they had discovered on a blackboard. 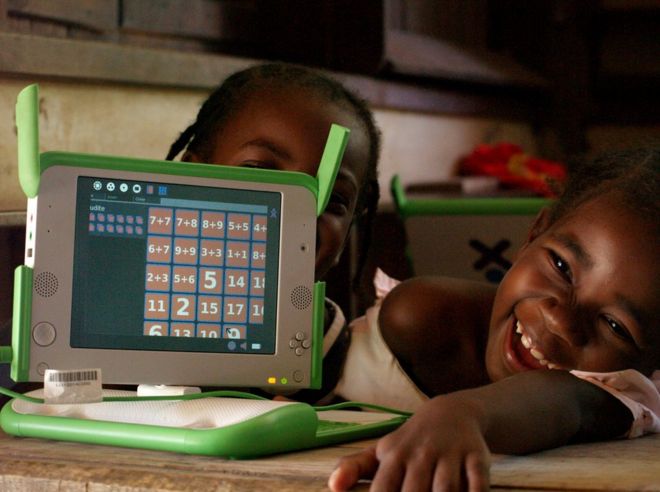 The One Laptop per Child project was one of the first to deploy small laptops in classrooms in developing countries, more than a decade ago. 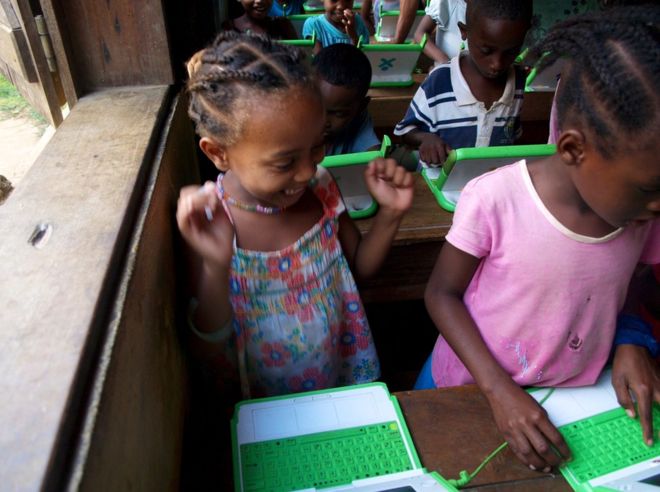 The children were able to practise their algebra by shooting spaceships.

One Laptop Per Child continues to expand its educational program in Africa. Thanks to a generous donation from the Nommontu Foundation, OLPC provided 27 OLPC Laptops to Centre de Chirurgie Orthopedique et de Rehabilitation Sainte Marie de Rilima,  the top health care facility in Rwanda for children with health issues.  The Center cares for approximately 70 children for three or more months while they receive treatment.  With this donation, these children have access to education and technology during their stay in the Center. OLPC provides ongoing training and guidance to facilitators and children.  The OLPC team continues to work closely with the staff in the Center, as we strive to guide the process of technology integration into the lives of these children who otherwise would have no opportunity to receive a formal education or learn to use technology while they receive care at the Center. The children are delighted with this opportunity to learn and use technology to create and experiment. These children are truly a model of hope for their parents, community, nation and the world.

Tundikhel, an only vast open space in between the city, is now filled with families who lost their homes in the recent earthquake. As we drive, walk or ride pass through the lanes alongside Tundikhel, we can see numerous tents – some donated by China and some made locally by the sufferers. When OLE Nepal team visited the ‘refugee camp like place’ it was heart wrenching to see people in need of necessities required for survival. Many organizations from various backgrounds provided immediate relief effort, such as food, water, shelter, sanitation, etc.

Amidst all the chaos, OLE Nepal are particularly concerned about the welfare of thousands of children who have been affected in more ways than one – distressed, displaced and completely traumatized by the scenes of devastations all around them. As we try to rehabilitate communities, it is utterly important to pay special attention to the emotional and physical well-being of these children. Along with their physical safety, their psychological security needed to be duly addressed as well.

With so many schools destroyed, and communities displaced, many children are deprived of education and will be for months, if not years. In this critical time, it is important to give children the space where they can enjoy their time in quality learning and exploring.

In Kirtipur, Khokana and Bungamati, OLE Nepal is now providing relief to the children at Tundikhel. Following are the photos taken during the first day of our relief effort. The Manuelita Foundation is a Colombian organization
founded in 2014 with an emphasis on teaching
technology, English and leadership skills to students.
Its emphasis is to educate on a one to one basis,
with a comprehensive model that leads teachers
to enrich the learning environment using modern
methodologies and technology, with the ultimate
goal of developing life skills for students. The program
works to create motivated and happy learners.
The Foundation has delivered 240 XO Laptops to
students in kindergarten through third grade and
other equipment to students fourth grade and above,
including teachers. The program has reached more
than 670 students and 430 families. The program
has a social component specifically designed for the
whole family.
The program “Educating One to One” is implemented
in the city of Palmira Valle del Cauca and benefits
the surrounding neighborhoods, including four
educational institutions of Antonio Lizarazo. The pilot
program began in Rosa Zárate de Peña.

What began as a year-long independent study course intended to prepare students for a service trip to deliver OLPC’s XO laptops  (http://laptop.org/)  along with lessons to elementary school students in St. John has grown to a multi-year student-led independent study experience using computer science as a vehicle for service.  This experience is “Service Learning” where learning is combined with service. The true spirit of Service Learning is that the learning cannot happen without the service, and the service can’t happen without the learning.
Benefits:
Some say that the most effective engagement takes place at the intersection of social engagement, political engagement, and economic engagement. This course provides CSG students with an opportunity for civic engagement while learning about technology, culture, lifestyle, and other aspects of life at the recipient school. The service aspect of this course engages girls with technology in a deeply meaningful way. The service becomes the objective rather than the computer programming or the hardware and software troubleshooting.
A secondary gain, but a primary goal, is that students are being introduced to Computer Science in a way that is attractive, engaging, and meaningful. The numbers of women in computer science have plummeted in the past decade, and remain low, so recruiting and retaining women into CS is an urgent need. This project helps to address the initial recruiting aspect of the “pipeline problem” by embedding the computer science into the goal of teaching and service. The science becomes something students learn along the way.

First Year Course Overview:
The premise of the first year’s course is based on acquiring donated XO laptops, and delivering them, along with training, during a service trip. This is not simply a charitable purchase and delivery. Students learn about the XO laptop, the open source software available for it, how to network the computers with one another and with the Internet, and hardware and software repairs including troubleshooting. They develop a curriculum, research existing curricula and activities, and plan and prepare lessons for the delivery period. (They will have to deeply understand these concepts since they will be expected to teach them to both students and teachers during the delivery phase of the class.)After the First Year:
Many students choose to take the course a second and even a third year. Some students choose to travel once, sometimes twice. Others choose not to travel and perform their service in other ways. All projects are student-driven, and evolve from the individual’s interests, preferences, and perception of what’s needed. Please see our Related Projects page, and visit our Etoys website for more information. And feel free to use any of our work and share it with others. We would love our work to be widely used. If you have ideas or needs, please use the email form to contact us http://www.columbusschoolforgirls.org/

This course meets approximately once per week. The general outline is as follows:
First Semester:

Thanks for your interest! Please check back periodically to view our progress.

John J. Sark Memorial School students give a demonstration of the digital animation skills they acquired using laptops donated to them by Princes Charities Canada and One Laptop Per Child Canada.

Prince’s Charities Canada, the charitable office for His Royal Highness, The Prince of Wales, partnered with One Laptop Per Child Canada to provide computers and training to indigenous youth. Lennox Island was one of seven First Nations across Canada to benefit from the pilot project this winter.

Thomas said he learned how to change colors on computer projects and how to make his name animated and dance.

Matthew Rowe, Director of Operations, Prince’s Charities Canada, said the participating schools and their students get to keep the computers.

Rowe said the students in the Lennox Island project created digital animation projects, talking mostly in Mi’Kmaq, about the traditions of their community. “The idea was to build digital skills while getting them to create projects that were giving them a chance to use the language and to learn it,” he said.

While digital animation is a new approach for the students, Rowe said the Grade 5 and 6 students was a good age range to work with. “They actually soak it up like sponges,” he said of the simplified coding language.

Grade 5/6 teacher, Nicole Gorrill, said the students already possessed basic computer skills but the shared project taught them new skills. “What happened, for most of the students, it really piqued more of their interest for technology,” she observed. “They’ve been learning these new computer skills, but they are also now able to kind of take what they’re learning in their cultural class here at the school and they have a new way of displaying that so that they can teach their friends or other family members,” she suggested.

“It’s been really, really good to boost their self confidence.”

Grade 6 student, Kavon Bernard is excited about the potential. He’d like to “make animations, set them up to the internet and get famous on animation.”

The students, working in teams of two, prepared one to two minute animation projects which they shared with other students, family members and elders. Lieutenant Governor Frank Lewis and former premier Robert Ghiz, a member of the Prince’s Charities Advisory Council were in attendance for the presentations.